Cannabidiol, or CBD, is now available in the UK in everything from skin creams to beers. But don’t set your hopes too high

This has been the year medical cannabis hit the mainstream. The government has announced that it is relaxing laws on when cannabis medicines can be prescribed by doctors, following high-profile cases such as that of Billy Caldwell, the 13-year-old boy hospitalised by his epileptic seizures after he was denied legal access to the cannabis oil that helps control them. Meanwhile a new generation of cannabis medicines has shown great promise (both anecdotally and in early clinical trials) in treating a range of ills from anxiety, psychosis and epilepsy to pain, inflammation and acne. And you don’t have to get stoned to reap the health benefits.

Caldwell’s medicine was illegal because it contained THC, the psychoactive compound that smoking weed socks you with. However, the new treatments under development use a less mind-bending cannabinoid known as CBD (or cannabidiol).

Natural, legal and with no major side effects (so far), CBD is a marketer’s dream. Hemp-based health products are launching left, right and centre, cashing in while the research is in its first flush of hazy potential. As well as ingestible CBD (also sold as hemp or cannabis oils or capsules) the compound has become a buzzword among upmarket skincare brands such as CBD of London. Predictably, Gwyneth Paltrow is a proponent of the trend, and has said that taking CBD oil helps her through hard times: “It doesn’t make you stoned or anything, just a little relaxed,” she told one beauty website.

Meanwhile, so-called wellness drinks infused with CBD are gaining traction. The UK’s first has been launched by Botanic Lab, promoted as “Dutch courage with a difference”. Drinks giants Coca-Cola, Molson Coors Brewing Company and Diageo are all considering launching their own versions, while UK craft breweries such as Cloud 9 Brewing and Stockton Brewing Companyare offering cannabis-oil laced beers, and mixologists are spiking their cocktails with CBD mellowness. The fancy marshmallow maker, The Marshmallowist, has added CBD-oil flavour to its menu, promising that “you feel the effects immediately upon eating”, without specifying what those effects might be.

While THC can make you feel edgy, CBD does the opposite. In fact, when used together, CBD can temper the negative effects of THC. Unsurprisingly, there isn’t much CBD in recreational cannabis strains such as purple haze or wild afghan; it is far richer in hemp plants.

Whether any of these CBD products will do anyone any good (or bad) is moot. “Cannabidiol is the hottest new medicine in mental health because the proper clinical trials do suggest it has clinical effects,” says Philip McGuire, professor of psychiatry and cognitive neuroscience at King’s College London. “It is the No 1 new treatment we’re interested in. But although there’s tons of stuff in the news about it, there’s still not that much evidence.” Large, long-term studies are needed; a 2017 review paper into the safety profile of CBD concluded that “important toxicological parameters are yet to be studied; for example, if CBD has an effect on hormones”.

McGuire doesn’t advise buying CBD products. You need to differentiate, he says, between the extremely high doses of pharmaceutical-grade pure CBD that participants in the handful of successful studies were given and the dietary supplements available over the counter or online. “These may contain quite small amounts of CBD that might not have large enough concentrations to have any effects,” he says. “It’s the difference between a nutraceutical and a pharmaceutical.” These supplements aren’t allowed to make claims of any effects. “If you’re making creams or sports drinks with CBD, you can say anything you like as long as you don’t say it will do such and such,” he says.

Two cannabis-based pharmaceutical drugs, manufactured in the UK, are licensed for prescription but only for very specific uses. Sativex has been available in the UK since 2010 and uses THC and CBD to treat spasticity in multiple sclerosis. And a new CBD-only drug, Epidiolex, was approved in June in the US to treat rare childhood epilepsies, with a similar decision expected imminently for Europe and the UK.

Another concern with non-pharmaceutical products, says McGuire, “is that people try them and find, ‘Oh, it doesn’t seem to work.’ Or they get side-effects from some other ingredient, because, if you buy an oil or cannabis product, it’s going to contain all kinds of other things which may have different effects.”

You only have to read the reviews under a CBD product on the Holland & Barrett website to see the extent to which anecdotal reports cannot be trusted. More than 100 customers gave Jacob Hooy CBD+ Oil five stars, with a few saying they always noticed if they missed a dose (presumably this made them less relaxed, although they did not reveal what they were taking it for), while 93 people gave it one star, saying it did nothing, or was too weak. One couple even said it gave them palpitations and a sleepless night. All these people had different conditions, expectations and situations. “And,” says McGuire, “you have to remember that anything can have a placebo effect.” While it looks unlikely that the recommended doses of these products will do any harm, McGuire’s guess is that doses are so small “that it’s like homeopathy – it’s not going to do anything at all”.

McGuire published his own study in August, in which CBD was shown to reduce psychotic episodes in people with schizophrenia. The daily dose was 1,000mg of pure CBD. And a study in which CBD seemed to ease anxiety, published in Nature in 2011, administered a single dose of 600mg, an hour and a half before giving participants a public speaking task. These larger doses contrast with that found in, say, Botanical Labs’ CBD drink. Rebekah Hall, the company’s founder, says her drink is for recreational rather than medicinal purposes and “the amount of CBD per batch is constant and precise, at 2mg per bottle”. A daily dose of two hemp capsules made by Nature’s Plus offers 15mg of mixed “plant cannabinoids” without a specific CBD count.

One of the strongest nutraceutical CBD oils is called Charlotte’s Web, with a 50mg dose. Charlotte’s Web is produced in Colorado by the Stanley Brothers, and named after Charlotte Figi, a girl who became famous in the US after her frequent seizures, brought on by the rare Dravet syndrome, were greatly reduced when she started taking CBD oil aged five. The company makes THC products too and is extremely successful, having just offered shares on the Canadian securities exchange, raising about $100m. 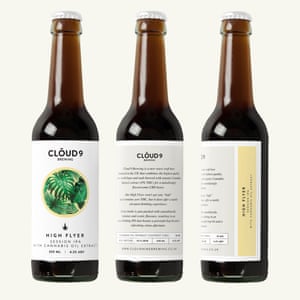 “Among the many benefits that Charlotte’s Web customers experience are: a sense of calm and focus; relief from everyday stresses; help in recovery from exercise-induced inflammation; and support for healthy sleep cycles,” says co-founder Jesse Stanley. But he is obliged to point out that the product is a dietary supplement, and no clinical claims can be made for it.

He emphasises that the company’s products are “whole-plant extracts that include a variety of phytochemicals, not just CBD. These beneficial compounds include a range of phytocannabinoids, terpenes and flavonoids that work together.” This isn’t necessarily seen as a positive by researchers, with McGuire saying: “They muddy the water.” However, Sativex is also a plant extract containing other cannabinoids and substances. David Potter, chief botanist at GW Pharmaceuticals, which makes the drug, says the evidence at the time the drug was developed “suggested there was a synergy between these active ingredients”.

The truth is that no one knows precisely what any of these molecules are doing to us. It is a case of finding the effects first and working backwards to understand the mechanisms. “There are a number of possible transmitter systems that CBD could act on,” says McGuire. “And it’s not 100% clear which ones are critical for anxiety, or psychosis or schizophrenia. But [the antipsychotic effect] is a different mechanism from existing treatments, which is a big deal because existing treatments aren’t working.”